[About train in Tokyo]

JR Yamanote line is the most useful one. Go through big towns like Shinjuku, Shibuya, Ikebukuro. If you say “metro” in Tokyo, it means the subway “Tokyo Metro”. not JR trains.

Takadanobaba station is linking the JR Yamanote line and metro Tozai line, and this two line is connected at Waseda exit. Other exits (like JR Toyama exit or metro exit #6, exit #7) are not able to transfer to another line. Also there is Seibu line but I guess most tourists never use this one.

[From Narita to Takadanobaba]

You can use a bus or train. If you have a valid JR rail pass, you should take JR NEX. if not, other ways are cheaper and faster.

If you have a non-Japanese passport, you can take a train named  NEX (JR Narita express), round ticket with 4000yen. But if you buy only one way, 3,190yen.

(If you have a valid Japan Rail Pass, NEX is included in the price.)

The fastest way from Narita to Tokyo is taking Keisei Skyliner. If you have a non-Japanese passport, you can get a discount of 2200yen/one way by purchasing online.  (Normaly 2470yen.)
Change to JR Yamanote line at Nippori station, 170yen to Takadanobaba.

The cheapest way is by bus, you can take the Tokyo shuttle for 1200yen.

Buy a ticket at the Keisei Bus counter (See the map below). A bus comes every 20 min.

(There is another bus named “Access Narita”, which leaves from the same bus stop. You can buy this bus ticket directly from the bus driver, but it arrives in a different bus stop of Tokyo station. Tokyo shuttle bus is easier if you head to Takadanobaba.) 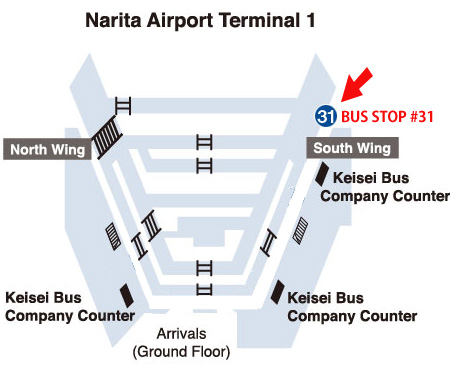 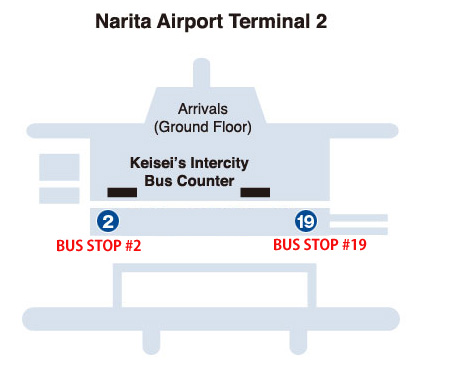 From Tokyo station bus stop, walk to the Metro Tozai line Nihombashi station exit A3. It’s just 2 minutes from the bus stop. If you want to use an elevator, enter the building behind the exit. It’s connected to the station underground. (If you take an  Access Narita bus, you will get off  just in front of Tokyo station Yaesu exit. It takes 8 minutes to the Nihombashi station exit A3.)

If you don’t want to use steps at all, walk to Yaesu north exit of Tokyo station, then take JR Yamanote line. Takadanobaba is about 30 min in the Ueno & Ikebukuro direction.

2 thoughts on “How to get to Takadanobaba from Narita airport?”